It is quite amazing that a small island and Jesuit Province like Ireland sent 106 Irish Jesuit missionaries to Hong Kong.

They arrived here in 1926.  6 still live in Hong Kong and ranging from the ages of 79 to 104. In December they celebrated 90 years in Hong Kong.  The most obvious legacy of the Irish Jesuits in Hong Kong is the impact they have had in education with two established colleges of Wah Yan Kowloon and Hong Kong.  They have formed and still form many of the leaders of Hong Kong society and the devotion of the Alumni to their former Jesuit teachers is renowned.

What is less known of the Irish Jesuits' contribution is in the area of spirituality and social outreach.  St. Francis Xavier Spirituality Centre in Cheung Chau continues to share the spiritual riches of Ignatian spirituality  with many people from the different islands and also with mainland China.  Fr. Sean O Cearbhallain, the CLC Assistant for Hong Kong continues  his great work.  Fr.James Hurley and many others worked with the marginalised  and poor of Hong Kong and their friendship with the poor was outstanding and a real witness to the Gospel.

Now is a time for giving gratitude for the past and support a future that will be sustained by young Chinese Jesuits.  What the Irish Province can continue to do is to offer a partnership of support to the young men from the Province and  to build on the past and create a new future for the Society of Jesus and for the people of the China Province.   The Irish Jesuit missionary project comes to an end while  continuity and new beginnings is in the hands of the Jesuits from the Chinese soil. It is a time for giving thanks.


Pictures:
Hong Kong is an architectural and engineering feat of populating such a small space with over 7 million people. It measures half the total area of Co,. Cork. They build up since they cannot build out and the apartments look like shoe boxes.

Fr. Joe Mallin SJ the oldest Jesuit in Kong Kong and his Companion Fr. John Russell have been in Hong Kong for over 60 years.  He is pictured with the accolade and insignia as a free man of Dublin city which was presented  to him by the Lord Mayor of Dublin last year in Hong Kong. 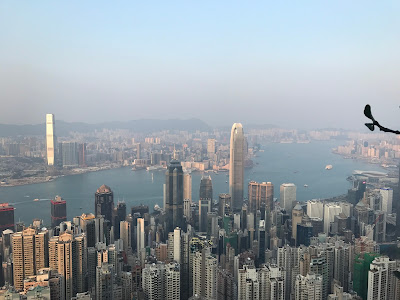 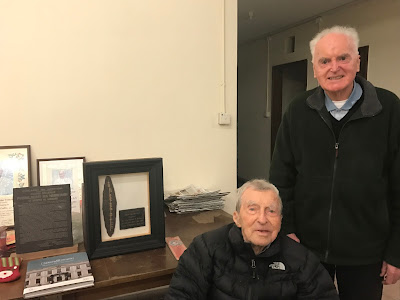 Frs. Joe Mallin and John Russell of the Kowloon Jesuit Community.
Posted by Séan O'Guibhne at 05:17 No comments:

Going to the Far East-retracing the steps of many Irish Jesuits.

Going to the Far East was an expression used by many missionaries in the past to mean they were  going to China and South East Asia.  It is indeed still far away-over 14 hour flying time from Dublin to Hong Kong. When the first Irish Jesuits went out in 1925 it took over a month to journey by boat.

Over 125 Irish Jesuits  have gone to the Far East  and a few remain.  6 Irish Jesuits live in Hong Kong, 2 in Japan, 1 in Singapore and one in Cambodia. It is indeed an interesting journey to visit them  in Hong Kong, Cambodia and Singapore.
Posted by Séan O'Guibhne at 10:52 No comments:

On the way home..looking back and leaving Rome at the end of GC36

Rome is emptying out of Jesuits from GC36 and they are moving back to home.  People this morning left for Dublin, Hong Kong, Sydney and the South Asians  and Latin Americans and Africans are on their way home during the week.

There is a quiet satisfaction that things have gone well.  A new General was elected, a mission decree written and a number of other decrees around governance were completed.  A new post  of discernment and apostolic plan  was set up in the Curia in Rome to assist the General to follow up on plans.

Arranging a meeting of the Congregation at Assistancy  level a   year in advance  had advantages and disadvantages.  Th meeting a year ahead got people in the mood of preparation, enabled people to meet one another and it also formed commissions to write relevant documents.  The disadvantage is that the Congregation in reality in the aula began with addressing documents rather than enabling people to really connect with me another, listen to one another and deal with live hot issues.  So process was a key lesson  from this Congregation.  It is really important from the very beginning that people connect with me another before they connect with documents.  Secondly, that people in charge of process should have real expertise in process and group dynamics.  It is not sufficient to to appoint representatives from each assistancy for the sake of representation.  The Jesuits should perhaps do what most other congregations do is to bring someone neutral, professionally skilled and formed to facilitate the sessions.  It could be much more effective in terms of dealing issues and time saving.

The positive experience of making this a paperless congregation through the use of tablets needs to be underlined.  It was an experiment that really worked and congratulations to all the backup technical experts who did such a great job.

The Congregation closed today on the 41st day.  It was an experience of great companionship- being friends of the Lord from across the oceans, the continents and seas.  It was indeed a celebration of our diversity and richness in the one mission in bringing  consolation, justice and peace to a divided  world.  It is also  a historic occasion.  There are only 36 such Congregations since the foundation of the Society of Jesus.  One felt that one was a part of history making.

Perhaps the greatest gift the Jesuits can bring- underlined by many including Pope Francis- is the gift of discernment - look at the world as God looks at it and make decisions out of that God space by listening and with  a real sensitivity to how the Spirit of God is moving within and without.

The hospitality of the Roman communities was fantastic in accommodating over 200 Jesuits.  The weather overall was good and the Italian peoples' warmth, good food and good wine  made such a difference.

After the Mass in St Ignatius Church the members of the Congregation went to the Gregorian community for snacks and a drink to celebrate the birthday of the new General who shares a birthday with his 90 year old mother.  It was a time for saying goodbyes to our companions from different corners of the globe. 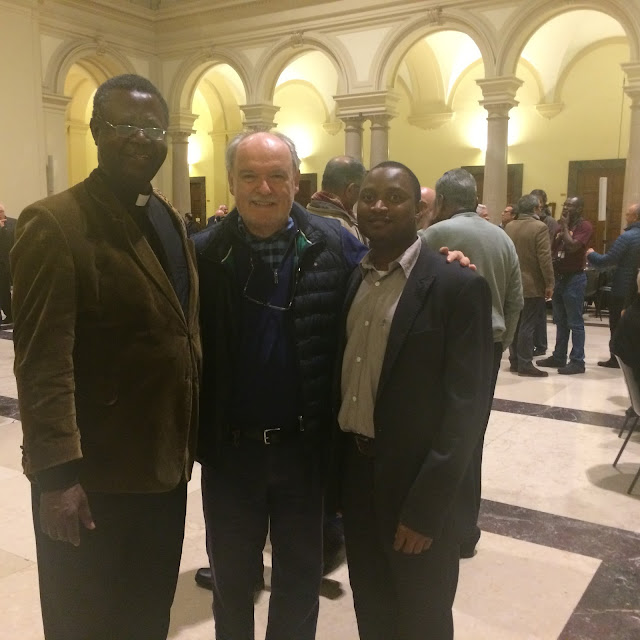 If there are no further contributions or amendments to decrees before 12 midnight tonight GC36 will finish tomorrow with a closing Mass at 4pm.

The aula passed a decree in the form of a letter of solidarity with Jesuits working in war zones. It was a decree that touched the hearts of all the members.


A recommendation was forwarded by the aula  to Fr.General to continue to strengthen protocols and
ongoing formation on child safe guarding and protection of minors since our faith that does justice demands that and our credibility in living and building a reconciled world
makes this an absolute requirement.

In the afternoon reviews according to conferences took place and further reflection of the experience will take place tomorrow.

It indeed has been a powerful experience for all and especially for those who attended congregation for the first time.  The highlights were obviously the election of a General from Latin America, the visit and speech of Pope Francis and the passing of mission and life decree.  Now the real work begins in implementing the decrees that have been passed.

I thought it would never see the light of day but it emerged after 6 drafts and over 100 amendments a decree on Life and Mission- reconciliation and justice.  it is not a perfect document but it has travelled a long road with much discussion and debate and one can go home happy now that the Congregation has elected a General  and produced a document on life and mission.

A great discussion also took place on a  letter of solidarity and support to Jesuits  working in war zones.  This letter touched the hearts of everyone and Jesuits who work and give their lives on the frontiers of war are indeed men of the Magis.

Good  discussions continued on the implementation of safeguarding protocols of minors and cultural  variances and sensibilities were touched on and it was a real learning experience.  Writing protocols is easy but implementing them in varying circumstances of work from refugee camps to schools in different political, social and cultural contexts is always a challenge.  But the credibility of all justice work will be tested by how minors and the vulnerable are protected and feel safe in all the works of the Society of Jesus.

Amendments were made to the 'governance in the service of mission document' and there was tense after today that the Congregations's work is coming to an end perhaps this week-end? Then it
will be time to say goodbye to Roma and Pope Francis. 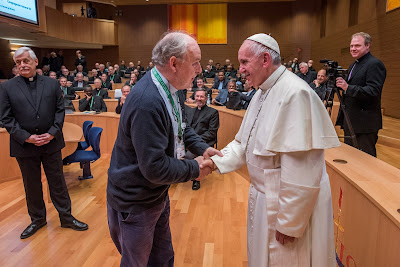 The Congregation strives to finish by Saturday next and this could be possible. The amendments  to the life and mission decree were on the floor of the aula today and will continue to be processed tomorrow.

The most outstanding discussion and life giving sharing today was the planned  letter  of solidarity to Jesuits and collaborators working in war zones. A number of Jesuits have died, some have been kidnapped and many of our lay partners struggle on the frontiers of war to bring consolation to people in conflict. The grace of accompaniment people in war is mutual.  The Society is blessed by the fortitude, endurance, courage, resilience of innocent people living  war.  They witness to hope where there seems to be little hope and offer forgiveness in such unforgiving circumstances.  Being friends of the losers in conflict show us how to be human and christian.  Breaking bread with the suffering is a blessing to the Society and evangelises us. We need to encourage one another by our prayer and solidarity in friendship and service.

Fr. Rupnik's beautiful frescoe  expresses the mutual sharing of Christ with one another as we accompany people in distress and conflict in war zones today. 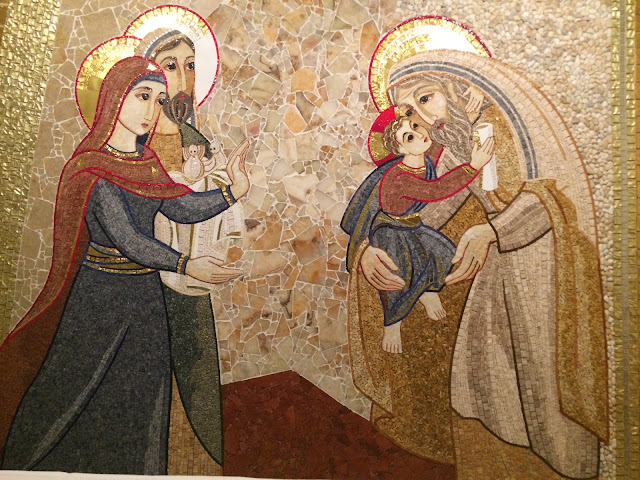